In his story, Ken Ringle, writes that "Terror-Inspired Red Tape Is Keeping U.S. Men and Their Foreign Fiancees Apart". The story details the massive and often unreasonable K1 Fiancee Visa delays being encountered by American men and their foreign born fiancees. The primary reason for this is additional screening procedures brought about by the terrorist attacks on September 11, 2001

Bill, now a retired colonel, during his years at the Strategic Air Command (SAC) he planned nuclear retaliation strikes against the Soviet Air Force. Ironically, his future wife's father served as a lieutenant colonel there. Bill also made it clear to me that he was a "hard-line" Republican!

In the process of getting go know him better I had many interesting political debates with Bill as I argued on the side of the liberal Democrat. After all, that is the viewpoint of many of my fellow Russian émigrés.

There are plenty of Russian women in our database who are agnostic toward politics. Yet Bill became attracted and later considered his soul mate "a woman who had been a committed communist most of her life and was still a commissar when the 'Evil Empire' fell." Later, he found her to be "more like women used to be in this country."

I was thrilled to read the line, "The couple are so clearly in sync that she's not only an American citizen, she's also a fellow Republican." While most of the story was written while I was in Moscow on business, I was glad to see the results of the story upon my return.

This is yet another moment that inspires me and causes me to pause and be thankful that I have a job that yields such great results for people.

Time To Give Thanks 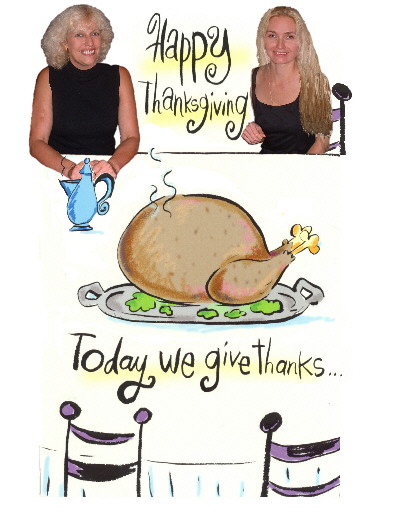 November is a special time of year to give thanks for all that we have. Thanksgiving is one of my favorite holidays. Although, I am from Russia, I really appreciate and embrace this American holiday tradition!

What am I thankful for?

First, I am thankful for a multiple-day break from my official duties at Encounters International. It provides me with the opportunity to spend some time with my family, to reflect on the year and be thankful for many other things as well.

Encounters International is my life. I have realized that when someone joins my organization, they are also joining a big part of my life! Both 'challenging' and 'not-so-challenging' clients become brothers, uncles, and sons; but more importantly, FRIENDS. I view these personal and professional relationships as "living proof" that our approach to matchmaking is successful for anyone with a positive attitude that is willing to work hard.

Where I work, I get to see a client's seemingly impossible dreams become a living reality. The hard work pays off for them. Sometimes, it takes weeks, other times years. However, they never give up reaching their goal. The cliché, "You have only failed when you have failed to try" seems to fit. Clearly, this is one of the best and most heartwarming things I am thankful for year after year.

In my continuing mission to bring others together for a lifetime, I am also surrounded by a circle of caring and giving friends. Clients, non-clients, and prospective clients selflessly, enthusiastically, and generously help Inna and me deal with our day-to-day challenges.

Things that may seem routine for some people are challenges. Whether it is preparing a document in English, my second language, or establishing a state-of-the-art electronic database, our friends rise to the challenge to help. Whether, it is manning a barbecue grill or planning an entire social event, friends respond and ensure success. I know this is an act of true benevolence since not one has asked for compensation. An expression of "thank
you" is always enough for them!