May 25th is the date for the last party in our temporary home/office on Howell Rd. It has been almost a year since Encounters International had to move and function in this place due to the fire restoration works in our main office on Snow Point Drive. Many of you became accustomed to the informal setting of the offices "with no doors attached" and no privacy to discuss the private matters of the heart. Instead, the atmosphere seemed to be more like a family gathering at the kitchen table where each member of the family will be concerned for the well-being of the rest of the family. I think that it was a rewarding experience for many clients. And it is no accident that this setting contributed to quite a few engagements and marriages.

But the best part of this temporary office setting is the secluded backyard with a beautiful swimming pool. It is no excident that the photos of the new ladies, taken in the backyard of this office like Elena Speroni's and Irena Cirui'i are their favorite pictures.

Now, that the May party is going to be the last party in this setting, it is the time to take full advantage of it. May 25 is the beginning of the Memorial Day weekend and many of out-of-state ladies reported that they have made all the arrangements to attend this Saturday Club party. Among the ladies who will fly from other states just to meet EI clients are:

Yana Solilova from Indianapolis too.

EI clients! Please do not miss this party. The ladies are concerned that they do not have a lot of interest from you. The only reason why they are coming to Bethesda from far away places is to meet you. So, if you had other plans for the weekend, try to change them after reading this message and be at 8527 West Howell Rd, Bethesda MD 20817 at 6 PM. Do not forget the swimming suites -- after all, it is a swimming pool party.

Due to the great success of last (April) Saturday Club barbecue party we decided to do it again this time in combination with the swimming pool activities. So, if you have your preferred "grillables", our motto remains the same "you bring it, we'll burn it". I know that grilled salmon was a big hit during April barbecue. Shish kebab was nostalgically favorite among Russian ladies because that reminded them of a Russian camping tradition with shish kebab as an integral part of any camping fire.

I am sure that we all will have a lot of fun during this last party on Howell Rd. I am looking forward to seeing you all there. 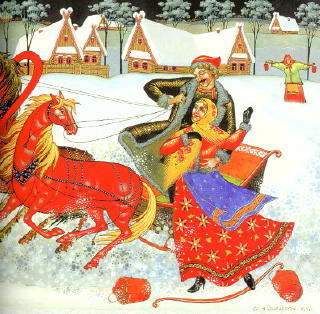 Russian Easter or 'Paskha' marks the beginning of springtime! This year, we celebrate Russian Easter on May 5th. You will find it interesting how the Easter date is established each year in Russia.

Russians celebrate Russian Orthodox Easter on the first Sunday after the full moon following the March equinox. Once every seven years, it coincides with the Jewish Passover. Russians will then postpone the Easter celebration until the next Sunday following the full moon.

The traditional springtime in Russia, following 'Paskha,' is called 'Krasnaya Gorka' or Red Hill in English. Like spring itself, this is the traditional time for new beginnings. What better new beginning than two starting a new life together. It's wedding season!

Until recent times, Russian wedding traditions have had several elements of the old Slavic rituals and customs. One of the most interesting was called stealing the bride or 'pokhischeniye.'

This stealing took place during the springtime festivals and celebrations. Several Slavic tribes would get together to sing songs and dance in circles. It was the celebration of the end of wintertime. During these festivals the men from one tribe found brides from other tribes and took these brides secretly away from their homes. Bride theft was actually an expected and usually accepted part of the celebrations. Although, in some cases, stealing the wrong bride would result in a major inter-tribal feud.

This interesting custom was preserved for a long time by the "old style" Orthodox community in Russia. At the end of the traditional spring festivities, a groom was supposed to grab a bride, carry her to the sleds and ride three times around a lake or the woods. Author Pushkin's short story, "Blizzard," is based on that same theme.

Later, stealing was replaced with buying the bride. Instead of going to all the trouble of stealing, the male suitor would pay a fee to the bride's relatives.

The amount of the fee was in accordance with the agreement that was negotiated prior to the engagement. When the matchmaker would broker the agreement between the parties, the deal would be sealed with a simple handshake. Thus, the Russian word for engagement-obrucheniye-is derived from 'ruka,' which means hand.

Elements from both of the above traditions or customs are still alive and well in modern day Russia. On the day of the wedding, the bride's girlfriends and guests hide her and the groom has to find her. The laughing crowd does its best to confuse him during the frantic search. To make matters worse, there are often imposters in the mix. Perhaps another girl in a bride's dress it there. Sometimes even a young man is hidden beneath the veil of the bride. If the groom is unable to find his bride, he may offer up a ransom or reward to entice someone to give her away to him.

Of course, the interested crowd will agree. But the price is still open as far as they are concerned. At this point, a relative, friend of the bride or even a guest will begin to exalt the qualities of the bride in an attempt to drive up the ransom price.

The more beautiful the bride is, the greater cook she is, the more loving sister or daughter she is, all translate to more ransom the groom is expected to pay. Today, the most common 'currency' used for payment are bottles of vodka, wine, or even beer.

It's all understood to be fun and games. But, the groom knows he must have some rubles or other 'currency' available to ransom the bride. Otherwise, he runs the risk of missing the start of the official wedding ceremony while looking for the absent bride.

Now you know that Krasnaya Gorka, the spring celebration that lasts several weeks after Russian Paskha (May 5 of this year), is the time for weddings in Russia. Encounters International is looking for an adventurous couple to reenact some of these Russian wedding traditions during our May 25th Saturday Club Social. The old traditions will be carried out at our swimming pool event in May.

As part of the tradition, we will 'negotiate an agreement' between the prospective bride's and the groom's parties at our April 28th Saturday Club Social. A matchmaker will be on duty to help reach this agreement-obrucheniye, our handshake.

Our April 28th Saturday Club Social will take advantage of the warm weather and warm spring mood. We are planning a backyard barbecue party that will start at 6 pm. The backyard is not only for food preparation. There will be plenty of Russian music.

The Russian music will inspire dancing. The ladies can't wait to be asked for a dance. Sometimes, they don't wait. She may ask you or simply dance with her girlfriends. Men, on the other hand, seem to feel uncomfortable to go dancing. It may be due to the 'strange' Russian music. I encourage our clients and Get-To-Know-Us members to bring their favorite music as well. We can then accommodate all cultures, and musical tastes.